Homepage » Tutorials » Which CS:GO Gun Is Better: MP7 vs MP9?

Have you ever found yourself wasting precious time in CSGO while trying to figure out which guns to buy? Well, if you have about $1500 at the start of the next round, then two amazing options at this price range are the MP7 vs MP9 models. You wouldn’t believe how similar these two are, so it’s only natural to be confused about which to buy.

As a result, this clear and simple guide between the MP7 vs MP9 CSGO guns will help you decide with ease. When it comes to submachine guns in Counter-Strike Global Offensive, this is the only guide you’ll ever need. Let’s start off with the bullet stats of these two guns. It’s important to know how many bullets the MP7 vs MP9 CS GO weapons can handle before starting the round.

The MP7 weapon features a magazine size of 30, meaning it can hold 30 bullets in one magazine clip. Fortunately, its reserve ammo is one of the largest in the game, holding up to 120 extra bullets ready to be reloaded and shot freely.

The MP9 is identical to the MP7 in terms of bullets. Its magazine also stores 30 bullets and it has an ammo reserve of 120 bullets. This should give you plenty of freedom to fire off a few extra shots every now and then without worrying too much. 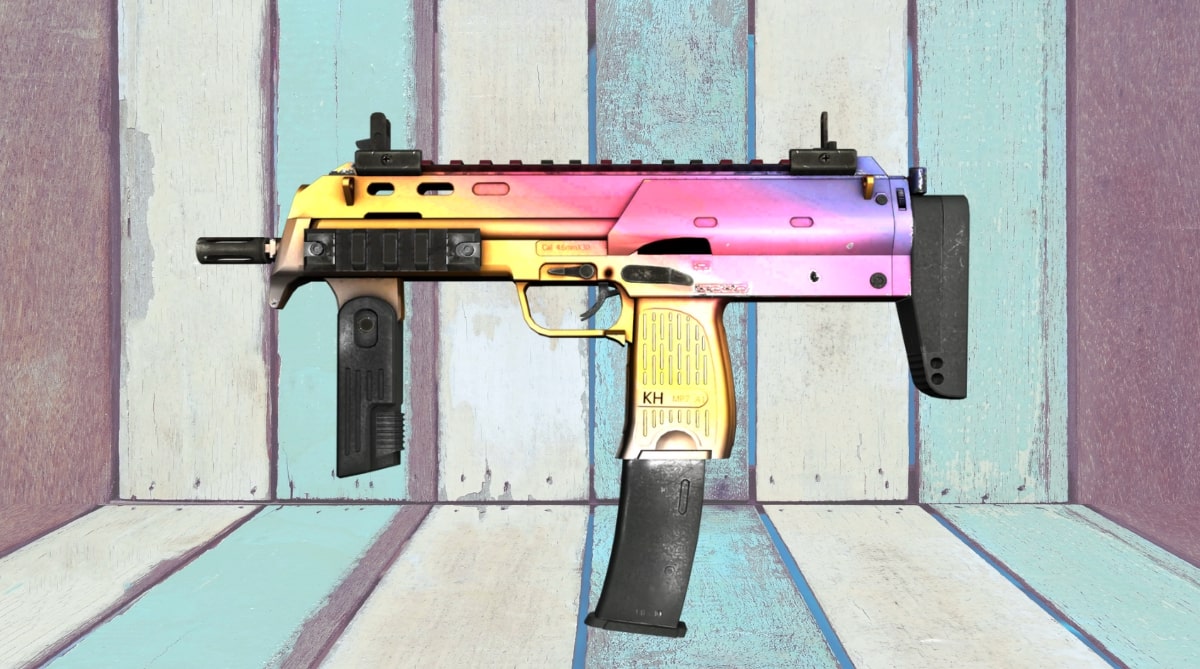 Learning about a CSGO weapon’s spray pattern can help you become much more accurate. Having iron sights instead of the red dot aim doesn’t really help here as well, but mastering the spray pattern will.

This weapon has a set spray pattern that isn’t random. This means that you can practice and master it, achieving even 100% accuracy with it.

When shooting with the MP7, you should remember this:

The MP9 has a remarkably similar spray pattern to the MP7. The only difference is, instead of taking your crosshair to the right, this one drags it to the left.

If you want better spray control with the MP9, do this:

Read Also: How To Effectively Control CSGO Spray Patterns in 2022?

When it comes to price, it’s extremely easy to tell which weapon is the winner here.

The MP7 costs $1500 in CSGO. As we mentioned, you get the same bullets and reserve ammo for this price as the MP9. In addition, the kill reward for this weapon is $600.

The MP9 costs $250 less than the MP7, standing at $1250 in total. It also has the same $600 kill reward. Although, the MP9 deals a bit less damage and has a way shorter fatal headshot range compared to the MP7. When it comes to fire rate, the MP9 wins by a decent amount.

The MP7 features a fire rate of 750 RPM. This means that it is able to fire off 750 rounds per minute if you just pressed the trigger and let it shoot.

See also  CS:GO Riot Shield: Where to Buy It and Do You Actually Need It

The MP9 has an 857 RPM, meaning it fires off 107 shots more than the MP7 in one minute. However, the MP9 deals slightly less damage than the MP9. When you put this into consideration and their rate of fire, they actually end up dealing almost the same amount of damage in one minute total.

Once again, damage is another thing that is almost the same when it comes to the CS GO MP9 vs MP7 comparison. In fact, most other SMGs deal quite similar amounts of damage on average.

This weapon deals an average of 29 damage per shot with armor penetration of 62.5 percent. It also has a 4x headshot multiplier, meaning it deals four times more damage on a single hit if that hit is a direct headshot to the enemy.

As mentioned, both of these weapons deal almost the same amount of damage. The MP9 deals slightly less than the MP7, standing at 26 dmg. However, its headshot multiplier is also 4x, just like the other submachine guns in CSGO.

When it comes to these two types of CSGO guns, knowing as much as you can about them can definitely improve your gameplay. With this in mind, here are some other important factors to remember about the MP9 vs MP7 CSGO weapons.

Read Also: CS:GO Wear Levels – How Does It Work?

Final Verdict: Is the MP7 Better Than the MP9 Now?

At the end of the day, you can make an easy choice based on what you’re looking for. If you want a cost-efficient gun that’s great at short range, go for the MP7. If you want to be deadlier at long range, reload faster, and deal slightly more DPS, use the MP9.

Obviously, buying a proper rifle in CSGO is always better. However, it’s not possible at this price range. In that case, choosing between the KWA MP7 vs MP9 or other SMGs in CSGO is always a smart way to go about it.

About the Author Carl Hardy 180 posts
Carl Hardy is an editor at SkinCashier, a website that covers the economics of skins in video games. He's been playing games for as long as he can remember, and his favorites include Counter-Strike Global Offensive and Rocket League. Carl loves discussing the game industry and all of its various aspects, but especially enjoys exploring the economic side of things. In his spare time, he likes to play guitar and listen to music.
[email protected]
Prev
Does Counter-Strike Steam Bug Allow Hackers to Take Control of Your PC? Next
Gamer’s Guide: How To Mastering CSGO Quick Switch Bind? Steam Trade URL – How to Find it? The Importance of CS:GO Skins Economy in Steam Market